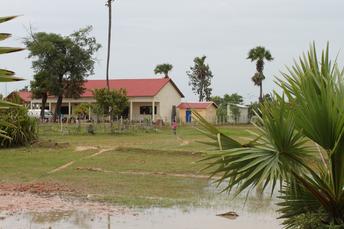 November 23, 2009 showing the old school and the new classrooms and library.. 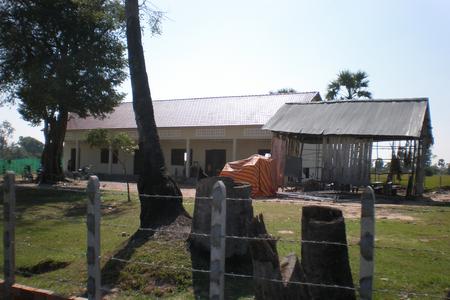 After the atrosities by the Khymer Rouge from 1975-1979, Cambodia was left with few individuals that were able to help put Cambodia back together again. .Food was scarce, families destroyed and the country in shambles. Families continues to escape and search for new opportunities. Many families went to Europe and the United States. Arriving in strange lands with hardly any belongings, these brave souls have had to build new lives, learn a new language and then provide for each other. This site is a tribute to all of the many Cambodians that are now in our circle of friends.

Education is the one key fundamental necessary for the future development of Cambodia.

100% of all proceeds go directly to support the school.  The Executive members (Founders), Ted and Bonnie Nieman, serve at will and provide all of their own expenses as related to Cambodia We Care activity.  Cambodia We Care is completely not for profit.

Cambodia We Care was founded in 2005 by Ted and Bonnie Nieman after a trip to Siem Reap to see Angkor Wat and the other temples. Ted, a retired army officer, had gone back to VietNam to show Bonnie where he had been during the war. They had planned to see the sites in Siem Reap and come on home.  It was during this time that they realized that fresh water, a most critical resource, was not readily available to the villagers. It was at this time that they both felt called to do something to help the villagers. Upon their return to the States, they then founded Cambodia We Care with the sole intent of providing fresh water wells. The first well was installed on 13 July 2005 for a grandmother that was raising her five grandchildren and helping several other villagers. She was splitting wood in the forest and then selling it in the market to earn money to feed the children. With the water well, she began her garden and started to produce fresh vegetables, enabling her to no longer have to sell wood for money. The water well installations continued and the Niemans then found that the locat Bhudist monks were looking to find a way to start a sewing center for deprived women. They then helped raise funds allowing the first sewing center to be built and to begin sewing classes. Thru the monks, they learned of a school in the village of Sambour that was about a two hours drive from the town of Siem Reap. What they discovered was unbelievable. The school build was a one room "shack" with a dirt floor and tree trunks for desks. The teachers were volunteers that didn't get paid by the government. A new school was build and opened on 23 November 2009. Now, from that original school of 30+ students, the classrooms are filled with over 270 students from Kindergarden thru 6th grade. Over 300 students are expected to enroll in the next school year of Nov 2015-2016.

The Importance of Education